Waag is working on MicroDonor. We investigate whether a system of microdonations would be a suitable business model for open-source developers, content makers and cultural organizations that prefer not to make money with the personal data of their users. Through this blogpost series, we keep you posted on our (re)search.

This post originally appeared on our website. This is the last post in a series; previously, we explained the background of web monetization, outlined our first technical findings, went into findings from our public event, and gave a general project update.

Waag stands for open, fair, and inclusive technology. Last year we presented the Public Stack model in the Digital Future Roadmap, which shows how to develop this type of technology step by step. This technology, which is based on shared societal values, should include fair revenue models that put citizens first. We have been researching web monetization for a few months now. You may even have been following from the start through this blog series. Web monetization means Internet users can transfer tiny amounts (micropayments) for online content or services – powered by the Web Monetization standard and facilitated by blockchain technology with the Interledger Protocol.

This process of micropayments between users and content and service providers currently runs through Coil. As a content or service provider you join this by creating a wallet (via e.g. Uphold) and installing a payment pointer on your site; as a user you create an account with Coil for a small monthly contribution that is then divided amongst the affiliated organizations. You install the Coil web extension, which turns 'on' as soon as you visit a 'monetized' website. At Waag we are building a prototype for a second extension, alongside Coil's. With this MicroDonor web extension, the user gets more control over their payments, and so micro*payments* become micro*donations*. In addition, we think beyond this specific prototype, about the ideal application and design of web monetization in a more general context.

Because it is a relatively new theme that we initially knew little about, we decided to organize a number of co-design sessions to brainstorm with others about micropayments (read: the wider use of web monetization) and microdonations (read: the prototype for our web extension). Completely online, of course, through a combination of video calling and Miro (below an impression of the atmosphere). In groups of between six and ten participants, some recurring and others participating one time only, we critically considered disperse aspects of web monetization. 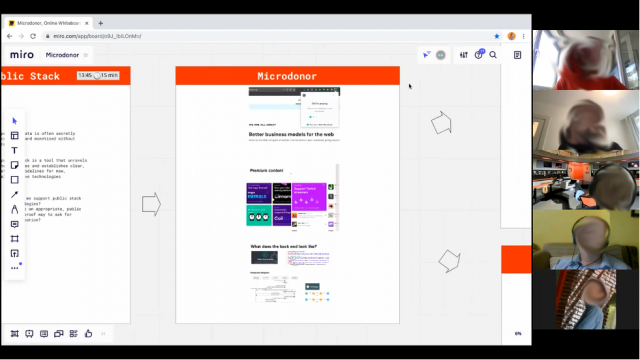 Participants included independent internet pioneers and experts in alternative financing systems, as well as news channels, cultural institutions and community currency initiatives (a.o. BBC, MoneyLab and Commons Stack). Colleagues from Waag also joined in to think along from the perspective of their own organization. During the knowledge round at the start of the sessions, which we did 'in real life' using colored objects that participants held in front of their camera, it immediately became apparent that we jointly held a mix of valuable expertise. Experiences also diverged regarding web monetization specifically: while some participants came explicitly from the cryptocurrency field or had experimented with micropayments themselves, others were relatively new to the subject. This resulted in lively discussions on a variety of topics, from tokenization and quadratic value systems to universal basic income and physical micropayments. An added benefit of current digital times was the geographical diversity: participants called in from all over the world, from Canada to Thailand and from Kenya to Germany and England.

During the first session on April 22nd, we focused on the perspective of the creative sector: why and under what conditions would content creators and cultural institutions use a micropayments system? There was general consensus on the potential of a web monetization model as complementary to existing revenue models (and not necessarily instead of), because of the small amount of money it entails and to prevent payment leading to the exclusion of certain users. The technical complexity was also underlined. In addition, a participant suggested the term 'micromemberships', because through microdonations you can be a 'member' of several broadcasters or platforms at the same time instead of being tied to one organization or broadcaster for a higher contribution.

The session on May 6th had a more technical approach and focused on the (open-source) developer perspective. In break-out groups, we discussed two concrete components of a micropayment system, building on challenges that came up earlier on in the research process: the risk of perverse incentives (How to guarantee the quality of content and prevent so-called “dark patterns”? ) and the granularity of the 'beneficiaries' (How to guarantee that the money actually ends up in the right place?). ‘Beneficiaries’ here refers to are makers, developers and digital platforms, i.e. the receiving parties. During the last session of May 20, as can be seen on the 'digital whiteboard' below, we again worked in break-out groups, once more on two concrete design challenges: how to get users to actually adopt such a system, and the concept of (content) collectives – on which more later. 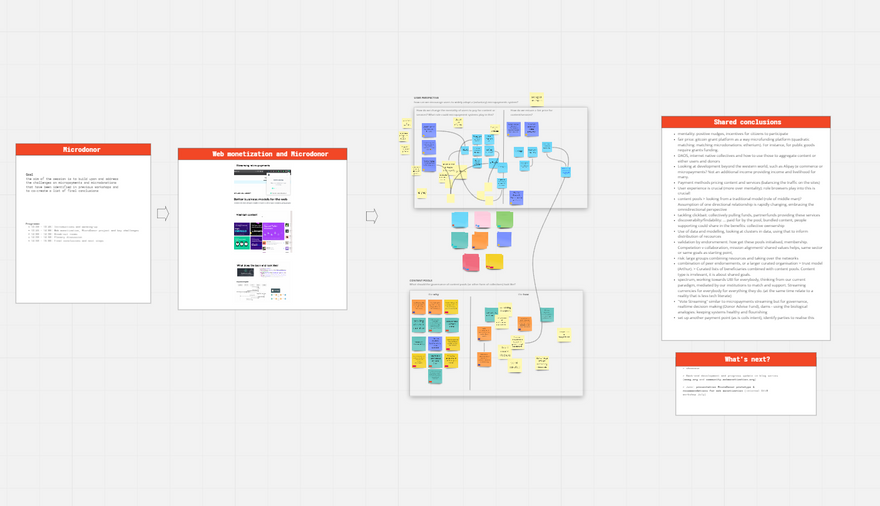 Where the public program (watch recording here, in Dutch) and the first co-design session were mainly about distinguishing possible challenges and problematic aspects of web monetization, the sessions gradually became more solution-oriented and increasingly we were able to zoom in on more focused themes. Ultimately, the discussion surrounding the implementation of micropayments largely boils down to the playing field. Web monetization could become a completely new (payment) infrastructure, built on the web standard (the ‘Web Monetization’ IPA) and the Interledger Protocol. How do we set these up? Who designs, manages or owns this new infrastructure?

Many conversations focused on the user, as a consumer of digital content and services. The wider adoption of a micropayment system firstly requires that such a system is understandable and accessible to most people. The MicroDonor web extension tries to make the model more user-friendly by, for example, allowing the user to adjust certain settings themselves. In addition, the 'success' of a web monetization system requires a completely new mentality, a paradigm shift to the explicit monetization of digital services and content. Many users do not realize that they are in fact paying already, albeit in a less tangible way: with their personal data and the associated marketing value. Web monetization offers potential, but the question is whether it is the ideal route. Digital content and services are so further capitalized and thus become a matter of supply and demand. And what is a fair price, especially for content and services that (should) have a public value that often remains unmonetized?

This brings us to the beneficiary issue. How to prevent that especially larger, high-profile platforms benefit from a micropayment system, whereby the quantity of content comes before quality and smaller providers remain untraceable? In other words, how do we ensure that monetization linked to streaming (and thus 'clicks') does not lead to perverse incentives such as clickbait and thus only strengthens the current 'attention economy'? The provider of a service or content is almost never a single beneficiary; how does the money truly reach the right place (at what level of granularity does the donation end up)? How do you reward the user when they are increasingly co-content creators, with the line between consumers and producers blurring? How do you register as an organization or individual to be monetized in the first place? In summary: how do we ensure an open and fair playing field?

Here's a representation of what the MicroDonor web extension looks like now: 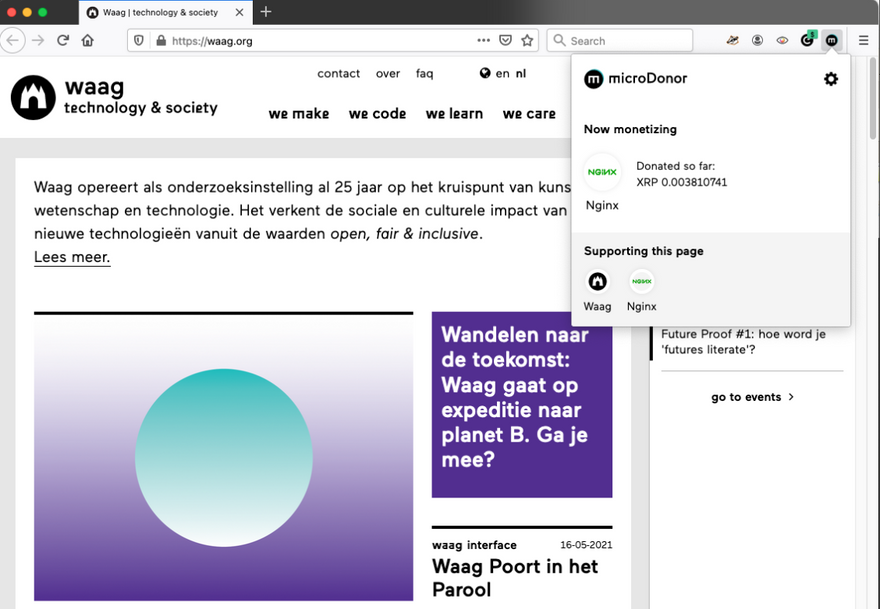 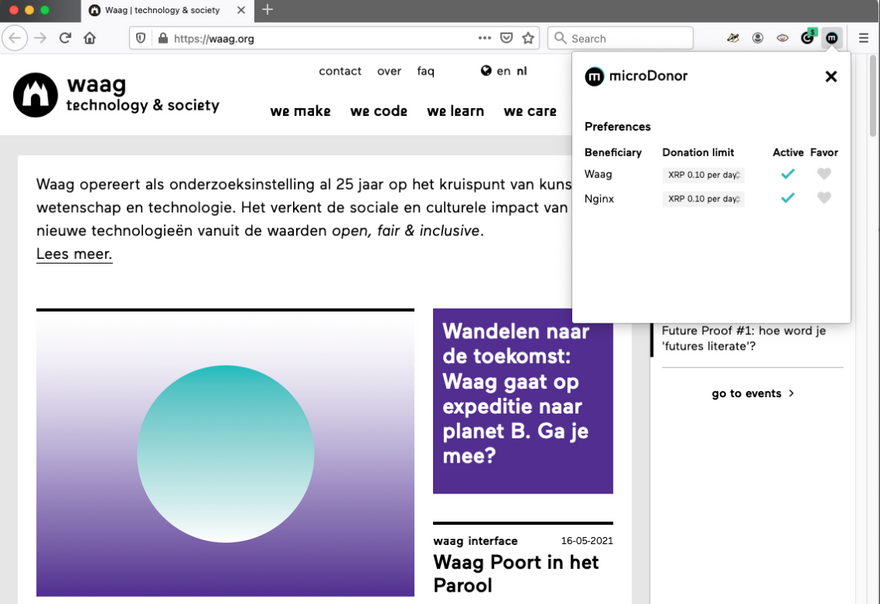 Towards a collective model?

We try to overcome some of these challenges with the MicroDonor extension. By exposing the entire 'stack' of organizations and individuals behind a platform, the granularity of beneficiaries is made clear, and by giving users the option to set a donation cap per beneficiary, there is less reason for clickbait. Other challenges converge in a design solution that came up during the sessions: the idea of 'collectives' of content and platforms, as a kind of 'package branding' around certain shared values or comparable services. These 'content pools' are partly meritocratic in the sense that revenues are distributed on the basis of contribution (but not on the basis of total clicks on the content), and are also built on solidarity (from larger parties towards smaller parties), similar to the current model within, for example, journalistic platforms.

Such a model has potential, certainly in the sense of the discoverability of smaller content creators and platforms. However, the exact governance remains an open question. 'Endorsement', or the process of admission to the collective, could be a P2P process in which the 'members' check whether the quality requirements are met. Trust plays a major role in this. On the other hand, you can think of (a combination with) a curator model, in which a central gatekeeper manages access to the so-called 'ethical registry' (list of approved beneficiaries).

Within the playing field, such a third party, an intermediary, is perhaps unavoidable. Ideally, micropayments are completely peer-2-peer without the involvement of a party like Coil, yet the advantage of a web monetization provider is that it does not trace exactly who is on which platform and therefore works more privacy-friendly. In one of the sessions, a role for banks was suggested: as an established part of the current financial infrastructure, banks could act as 'provider' (and thus manager of the money flows), with a second, social party acting as curator and setting the conditions for monetization and oversight. This is also an idea that needs further development: is this profitable for a bank, and should they use ledger technology?

In short, many new insights and ideas, of which we have tried to name the most important recurring topics above. The sessions demonstrate once again the value of bringing people from all walks of life together. This summer we will present the prototype for the MicroDonor web extension at a public event, and we will substantiate our findings and recommendations on micropayments in a public report – keep an eye out on this platform and our website. We continue to look for the balance between what is already possible and where we would ideally like to go (also in the field of cryptocurrencies, for example). This project is coming to an end, but the joint knowledge we have created will undoubtedly lead to further initiatives.

Apply to Speak/Present at the ILP Summit in November!

Once suspended, microdonor will not be able to comment or publish posts until their suspension is removed.

Once unsuspended, microdonor will be able to comment and publish posts again.

Once unpublished, all posts by microdonor will become hidden and only accessible to themselves.

If microdonor is not suspended, they can still re-publish their posts from their dashboard.

Once unpublished, this post will become invisible to the public and only accessible to Hannah.

Thanks for keeping The Interledger Foundation Community safe. Here is what you can do to flag microdonor:

Unflagging microdonor will restore default visibility to their posts.