When astronauts see the earth for the first time from space they describe a powerfull experience, a shift in awareness. When seeing the fragile blue planet in space they experience there are no boundaries or borders on our planet, everything is interconnected.
This is called the overview effect, a term coined by space philoshoper Frank White in his book with the same name.

Frank being interviewed by NASA: "And again, for most astronauts, the feeling that the Earth itself is awe whole system, and we're just a part of it. We need to think of ourselves as part of this organic system, if you will. And then there are other things that come out of it that is kind of conclusion they draw. I mean, those are things they see, and then there are conclusions they draw. And one of them is that we are really all in this together. Our fate is bound up with people that we may think are really different from them. We may have different religions, we may have different politics. But ultimately, we are connected. Totally connected. And not only with people, but with life."

Can you imagine how this experience would feel when you would see the earth while floating in space? 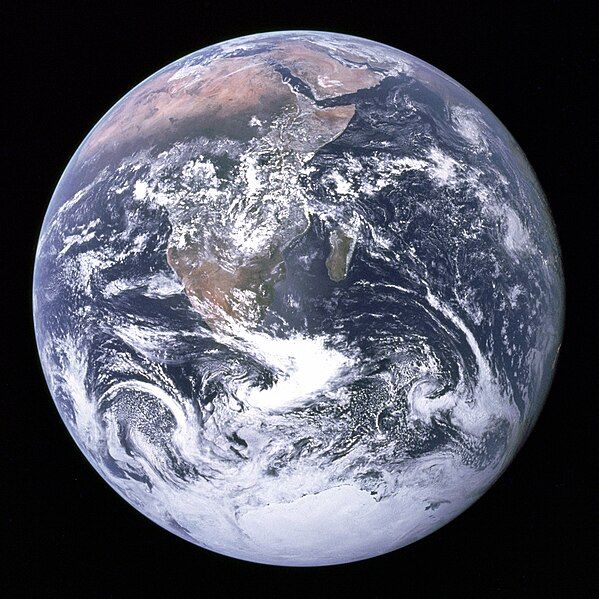 The Blue Marble is a famous photograph of the Earth taken on December 7, 1972, by the crew of the Apollo 17 spacecraft en route to the Moon at a distance of about 29,000 kilometres (18,000 mi). It shows Africa, Antarctica, and the Arabian Peninsula. (source: wikimedia commons )

The big picture: why reflecting our planet interconnected system in data and payments can contribute to citizen science

When all of the systems on our planet are interconnected and topics such as environmental health become more urgent, a global view on our shared challenges as habitants of this planet becomes even more important. Gaining insight in societal challenges demand a global and interconnected approach because these challenges don't stop at borders.

Citizen science, where citizens participate in research, can help in addressing these societal needs and accelerate science.
Innovation in financial transactions and removing barriers in payments involved in citizen science can help to accelerate this field of research even more.

To do so the systems we design regarding data and financial transactions, need to reflect the interconnectedness of our planet to support a global approach.

In this blog for researchers and other readers that are interested we describe a summary of our project which involves researching a prototype of a survey management system that enables researchers to generate a survey and rewards a respondent for filling in a survey using the Interledger protocol that supports global payments. The data is made available in linked data format to store on their own personal data storage. We dive deeper into the challenges of reusable data and surveys and describe how privacy is ensured in the payments and survey service.

Our goal is to support a global approach in citizen science and research how to make data and financial transactions more open and accessible to support a more inclusive wellbeing. This project is powered by Grant for the Web, a fund to boost open, fair, and inclusive standards and innovation in Web Monetization.

We will address these topics in the next paragraphs, starting with the connection between citizen science and financial transactions and how these can strengthen each other.

Financial transactions are a way to incentivize and enable citizens to participate in science. Some examples:

These examples ask for a global financial network where payments are seamlessly connected. How can this be created?

Global financial network: Interledger and Grant for the Web

Interledger is creating a single open global payment network that connects everyone and enables them to transact easily with anyone, no matter the location or currency. It aims to make sending value as easy as it is to send information over the internet. The Interledger Protocol is open-source and is not tied to any one company or currency.

Based on the Interledger protocol, Grant for the Web is funding projects that use Interledger and Web Monetization, a way for creators and publishers to get paid for their work without relying on invasive ads, paywalls, and the abuse of personal data.

Grant for the Web will spark a healthier internet built on open standards, giving people more independence and control over how they distribute and monetize content, and generating better business models for the web. They have a community-page where funded projects like ours are published and discussed.

Our learning on payments

In our project we want to reward a participant after they filled in a survey. We separated the server of the payments from the survey server so after filling in a survey a respondent is redirected to a screen where a respondent can fill in a payment pointer and get a reward. This will act as a reward collection service that's reusable.

We've come a long way building the payment server and enabling setting payments with coupons, and finished the reward collections service based on the current integration we have built with Uphold (a wallet supporting Interledger Payments)  and connected this with the survey server, but found out that there is a missing last puzzle piece since Uphold and other wallets currently do not support for sending payments yet.
However Rafiki is aiming to solve this by becoming a one stop solution for Interledger payments. It's an open source package that exposes a comprehensive set of Interledger APIs and is intended to be run by wallet providers, allowing them to offer Interledger functionality to their users.

How can we pay people and know as little as possible about the payments?

We separated all the sensitive stuff the survey-site may or may not be doing from the payment service. The payment is handled by a small separate service, called by the survey-site. And of course that service needs to know it really should pay the user and how much. All verified so no fraudulent action is possible. And the payment service, well it should just ask where to send the money to, no further questions asked.

So how did we do this? The system consists of two parts: a library to include in the website and a stand-alone payment service. While setting up a payment service, we create an asymmetric key pair, one key for the site and one key for the payment service. And both are kept secret.
If you want to learn more: a Data Privacy Impact Assessment for the Survey Rewards and Payment Service you can find here. Also a blog on privacy in this project is available here.

Lifting the value of survey data: making it reusable

Boths surveys and survey responses are not standardized a lot, at least not technically. This means that the questions themselves have vastly different representations, and the same goes for the answers. Reusable data and surveys are more important to become interoperable for scientific goals and are also likely to be involved in payments because they become more valuable.

Reusable responses can lead to nice use cases like previously entered response data in a personal data storage could be usable while filling in new surveys and standardized survey responses could also be used to gather personal insights.

To achieve this both the surveys and the responses need to be standardized: the question itself, the required datatype of the response (like date/time), a semantic definition of the property being described (like https://schema.org/birthDate': this semantic definition makes things easier to share, because it prevents misinterpretation and remove ambiguity) and query description describing how a piece of information can be retrieved.

The inventor of the World Wide Web (sir Tim Berners-Lee) started an initiative called Solid, which is a set of specifications that aim to help users get control over their data, and improve interoperability between web applications. However, achieving the high degree of survey response interoperability seems a bit too ambitious, at this moment because the problems regarding data discoverability and data types are not yet solved for Solid.

The Shape Trees specification aims to solve some of these problems, but implementing this (still in draft) spec in our infrastructure would be too time consuming at the moment. The specification is very interesting, but is also not stable yet and quite complex. It requires having a SHEX parser, working with dynamic filenames, supporting file systems and more.

Some of us are working on a specification that has some similarities to Solid, called Atomic Data. It can be converted to RDF, but it is a bit more constrained.

If the answers based on a survey are stored in a personal data storage, these become reusable from a machine point of view. To become a valuable questionnaire the context needs to become insightful too. During the interviews with researchers it became clear that there are some projects running that try to standardize the surveys and to describe their context in a standardized way, but none of those initiatives formalize their work into ontologies that are structured enough. One possible way forward is to extend an existing project like Data Documentation Initiative (DDI, https://ddialliance.org/) with formalized descriptions of the data.

The project Cos4cloud, is about standardizing data for the European Open Science Cloud (an environment for hosting and processing research data to support EU science) and also involves interoperability, a topic that is related to reusable surveys.

We learned about the OGC Standards to standardize data. In the Cos4Cloud project they are working on an api called OGC SensorThings API.
They are building an api based common data model, with a grouping concept and relationship concept. This helps how to get from databases to relationships.

If you want to know more background information about this project read our in-depth report with more information and watch the demo below!

Apply to Speak/Present at the ILP Summit in November!

Once suspended, refdhd will not be able to comment or publish posts until their suspension is removed.

Once unsuspended, refdhd will be able to comment and publish posts again.

Once unpublished, all posts by refdhd will become hidden and only accessible to themselves.

If refdhd is not suspended, they can still re-publish their posts from their dashboard.

Once unpublished, this post will become invisible to the public and only accessible to Gijs.

Thanks for keeping The Interledger Community 🌱 safe. Here is what you can do to flag refdhd:

Unflagging refdhd will restore default visibility to their posts.