The biggest challenge not-for-profit independent media face is funding. Is web monetisation a solution? That's the question we wanted to explore.

Our project is to build a prototype web monetised news aggregator that displays news content from multiple independent media sources in one place for easy viewing, while enabling viewers to make micropayments to content providers as they view their content.

We are happy to report that we have just hit a key milestone on our project: we have completed the development of an initial prototype and have sent it out to a group of users for feedback.

So far, we've enjoyed getting to grips with RSS technology. The biggest challenge we've had is with user interviewing. We wanted to have a better understanding of the "jobs, pains and gains" our audience have with consuming news and funding media. We discovered that organising, designing and conducting effective interviews is a real skill. It's been a great learning experience so far and very valuable.

Complete! After initial research, designing wireframes and mockups, we have developed a wordpress site. The prototype is now live:
https://www.news.glowbox.coop

Objective 2 - To test it out with users and get feedback

In Progress. We have conducted a first round of interviews with 30 users on how they currently consume news and support independent media. We have just sent out a link to the prototype and asked users to create accounts with Coil, a web monetisation payment provider.

Objective 3 - To write a final report

To Do. We will compile a final report based on the feedback and data we collect, scheduled for March.

Months 1 and 2 were Customer Discovery, researching and interviewing our target audience on the media.

Months 3 and 4 we spent designing and developing the prototype. The site is built with wordpress and using an RSS plugin that retrieves news content from multiple media sources. Customising the plugin and creating custom post types to achieve what we needed was the biggest development task. 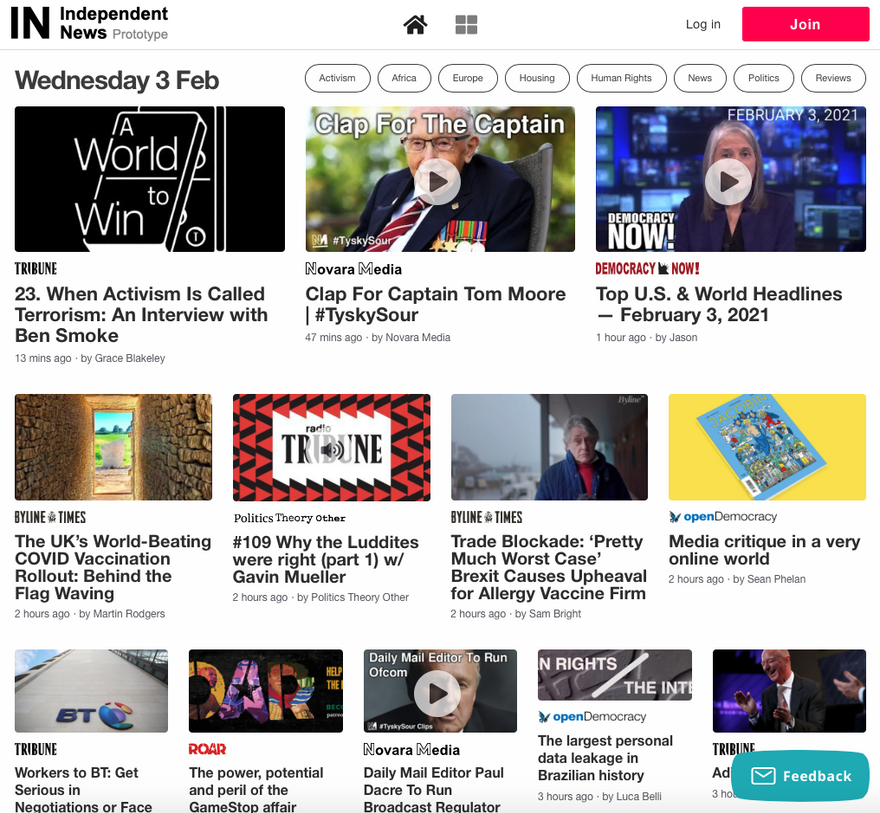 In the final two months we will be gathering feedback from users and our independent media partners through questionnaires and video interviews and presenting this in a final report.

Are you a supporter of independent progressive media? Would you like to help us test out the prototype? Get in touch.

Ownership of the Media in the UK is highly concentrated. Just five companies dominate 80% of the market. Read the
'Who owns the media?' report by the UK Media Reform Coalition:
https://www.mediareform.org.uk/media-ownership/who-owns-the-uk-media

Once suspended, ina will not be able to comment or publish posts until their suspension is removed.

Once unsuspended, ina will be able to comment and publish posts again.

Once unpublished, all posts by ina will become hidden and only accessible to themselves.

If ina is not suspended, they can still re-publish their posts from their dashboard.

Once unpublished, this post will become invisible to the public and only accessible to Jason Chrysostomou.

Thanks for keeping The Interledger Community 🌱 safe. Here is what you can do to flag ina:

Unflagging ina will restore default visibility to their posts.