Howdy y'all! We're so excited to be sharing this project update with you. TL;DR: things are going great and we've made good progress on all our stated objectives for a really unique web monetization use case: content preservation and more generally, data storage. After quite a bit of R&D we've identified some important opportunities to expand the Web Monetization ecosystem and improve how Permanent.org interfaces with 3rd party applications.

We set out to explore web monetization and micropayment business models for permanent digital storage. Specifically, we proposed a set of deliverables that would build a demonstration application that relied on web monetized micropayments to secure storage for a user. After much discussion on the team and with the GFTW program team, we chose Etherpad as our target application and decided to integrate web monetization as a plugin. You can learn more about why we chose Etherpad in this post.

We're excited to get to the sharing part. Here's what we've done so far.

In our original proposal, we set out to accomplish a defined list of objectives.

The status of each of these objectives is “Nearing Completion” with the exception of documentation and gaps. We're knocking out our punchlist of minor improvements to the demo app and in the midst of building out updates to the API. We still have quite a bit of work left to do on documentation and communication. We need to organize our learnings to meaningfully improve the community's understanding of web monetization ecosystem gaps. 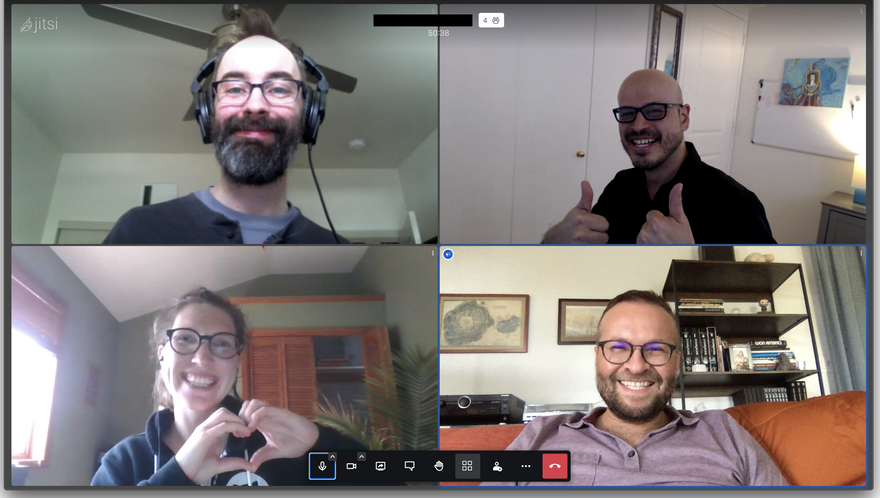 Our team consisted of three key people, plus me (moving counter clockwise in the screenshot, starting from the top left):

Some combination of this team met weekly to review goals and priorities, report progress, assign tasks, and make direct progress on grant objectives. Together, we completed the following activities:

Design a workflow that builds on the Web Monetization protocol

We completed the first iteration of this work during the research phase of the funded period. We made an early discovery that Coil was the only viable web monetization payer we could leverage for this work. We honestly could have spent months digging deeper into web monetization, but we knew that building the Etherpad integration would teach us more than static research, and we very much wanted to deliver a usable proof-of-concept.

Upgrade the Permanent API to support that workflow

We made critical upgrades to the login functionality of the Permanent API to achieve the goals of this grant. We identified several more significant improvements that could orient Permanent more broadly around web monetization and 3rd party integration in general. Those changes are beyond scope, but streamlining authorization for automated use would benefit Permanent in multiple ways. We have added those changes to the Permanent development roadmap, and plan to complete them after the grant period, but before the end of 2021.

The main tangible output of our work is a repository containing an Etherpad plugin that implements web-monetized (COIL-based) micropayments to authorize permanent storage of pad content. That repository is available on GitHub, and we published its contents under a GPLv3 license.

The plugin we built does demonstrate the functionality we originally envisioned. It is, however, just a demo. We plan to go further. We hope to host a polished version of this app on the Permanent production environment after the completion of auth improvements. The demo also contains generalized functionality that eventually could be plugged into any Etherpad instance.

This task is ongoing!

We already shared a brief summary of our project goals with the web monetization community a few weeks ago in this post.

We've also been working in the open on GitHub, where anyone is welcome to review our work and contribute. However, the code repository is currently sparse on documentation, which we will address in our next sprints as we approach the end of the project.

During the course of settling on Etherpad as our demo app, we also reached out to the folks building the amazing docs.plus tool! Our conversation with Edward Saperia was particularly inspiring and expanded our understanding of what was possible to build on top of Etherpad!

Of course, our project began and ended with user research. Before any design began, we conducted informal interviews with non tech-adjacent individuals in our community to understand how they would expect this kind of functionality to work for them. At the end of this work we will circle back to users and present them with our prototype for feedback to understand whether the features are a value add and where we can make meaningful improvements to the user experience.

Finally, as we wrap up documentation, we plan to host a series of webinars, advertised broadly but specifically to the web monetization community to familiarize different target audiences with our new found understanding of the problem we sought to explore, the gaps in web monetization, how the Permanent.org model can add an important preservation tool to the creator toolbox, and how we designed and built our specific demo application for Etherpad.

In summary our next steps include the following:

Fundamentally, we are calling for all people interested in the broad issues of digital preservation and how new pay for storage models can help us not only save what's already published, but create new channels for all people to control and preserve their digital legacies.

If you are a digital archivist or have a general interest in the digital dark ages, check out this blog post we did with the Long Now Foundation and get in touch to tell us what you think!

If you are an open source developer who wants to get involved with work that can have a transformative impact on the preservation of digital content and our model for understanding history, or just like to get your hands dirty in shaping early-stage projects that have real scale potential, get in touch to tell us what you think! Or dive right into our GitHub repos!

If you are a content creator, family historian, or digital pack rat then check out Permanent.org and tell us what you think! 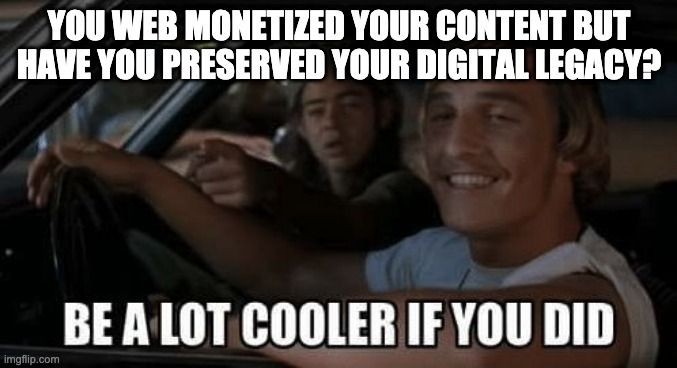 Storage To The People
Everyone leaves a legacy that deserves to be preserved.

Once suspended, storagetothepeople will not be able to comment or publish posts until their suspension is removed.

Once unsuspended, storagetothepeople will be able to comment and publish posts again.

Once unpublished, all posts by storagetothepeople will become hidden and only accessible to themselves.

If storagetothepeople is not suspended, they can still re-publish their posts from their dashboard.

Once unpublished, this post will become invisible to the public and only accessible to Robert Friedman.

Thanks for keeping The Interledger Foundation Community safe. Here is what you can do to flag storagetothepeople:

Unflagging storagetothepeople will restore default visibility to their posts.