Hey Community! We at Waag, Amsterdam are excited to share our progress on the MicroDonor project. MicroDonor focuses on the potential of microdonations (facilitated by the web monetization standard) as an open and fair business model for content makers, open-source platforms and other organizations that try to operate according to public (societal) values. 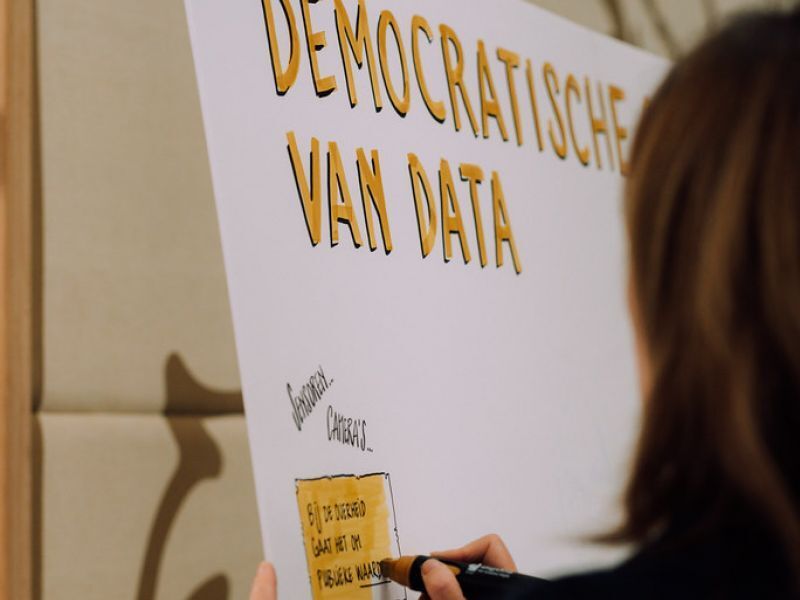 In general, the project is going quite well. After an initial exploratory phase in which we searched a bit to completely grasp the concept of web monetization (especially for the less technically-knowledgeable in our team), we are now fully immersed. We see MicroDonor as a dual process: technical and social aspects go hand in hand. Whereas the former focuses on the development and prototyping of the actual technical infrastructure, the latter considers input from user groups and the general public to discern societal value and specific user interaction requirements.

The past months, we have started investigating the technical workings of web monetization. We constantly try to test our technical research findings for their actual value through the social track of the project. We keep anyone interested updated on our trajectory through a blog series and try to actively engage the public through events and co-design sessions, a highlight of which was our evening program last week (more under ‘Key activities’).

Over the course of our research trajectory, some of our initial objectives have slightly evolved.

First of all, we decided to expand the scope of the project. Whereas we initially focused on the specific user groups that we had distinguished in advance, in particular open-source platforms (such as Jitsi) that we use ourselves as organization, we gradually broadened to the larger potential of a microdonation business model for digital services and in the creative sector. Is this a model that we would actually want to set up on a larger scale? We have now framed the project within our Public Stack model, that stands for open, fair and inclusive technology (and according business models).

The previous point links to our key user groups. We originally had in mind (1) open-source developers, (2) content makers and (3) cultural organizations as main user groups for our three co-design sessions. We gradually realized the latter groups slightly converge, and have reclustered. During the co-design sessions, we now want to first focus on the general socio-economic requirements of a micropayment system (session on April 6th), then look at the requirements specifically from a content maker / cultural organization point of view (session on April 22nd), and finish with the open-source developer perspective (session on May 6th). The main objective as stated in our proposal remains the same: to co-design and subsequently test the concept and its implementation in the functionality of microdonations.

Regarding the technical research trajectory, the type of extension we are developing is different than initially planned. As described under ‘Key activities’, we have decided to design an additional web extension instead of acting as web monetization provider ourselves, as this proved more in line with our research aim.

For the technical part of the project we started with background research on the workings of ILP and the web monetization API. We used Uphold to make a personal wallet and one for Waag, which posed a few barriers in terms of privacy (it proved necessary to upload some personal data to set up a wallet). As a result, we decided to start with the ILP test network. We developed an initial proof of concept of a microdonation system by using our own implementation of Jitsi meet.waag.org, in which we connected to the ILP test network. Eventually, micropayments were successfully transferred from our personal wallet to the Waag wallet when the Jitsi session ended.

The main aim of our project is to conclude whether micropayments can be a suitable and desirable business model for online platforms and content. In our original plan, we thought it would be necessary to act as web monetization-provider ourselves (as a new Coil, so to speak). We gradually concluded that doing so would not have added value for our research question, as the web monetization API offers enough flexibility in its current use through Coil. We have thus decided to focus on developing a prototype for a second web extension, in addition to the web extension that you install as member of Coil. This additional extension focuses on the specific functionalities and requirements of monetization, providing the user with more flexibility in choosing how to monetize preferred platforms and content (eg. which of the involved organizations to support). A mock-up of the web extension as currently developed is shown below - with Dutch explanation. 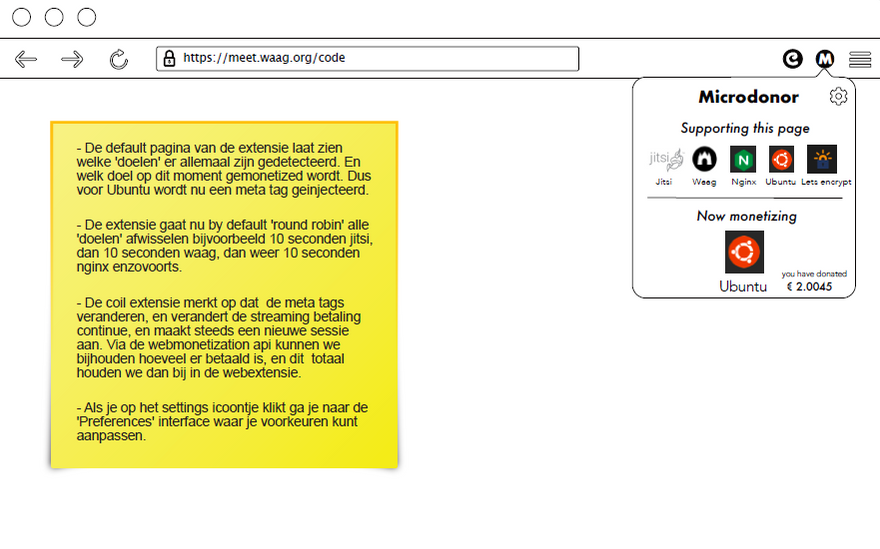 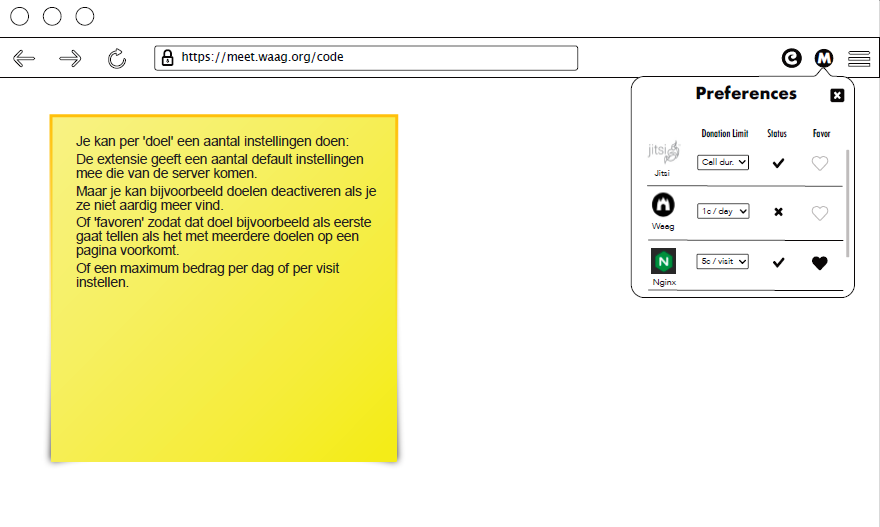 As for the social part, the plan is still in line with our original proposal: a stakeholders symposium, followed by three co-design sessions, followed by a final presentation of the project findings at a conference. We successfully organized the first event last week, in the form of a public evening event with a panel discussion of a diverse group of speakers (including input from the audience). The program brought together perspectives from a diversity of backgrounds, from public broadcaster to independent journalism platform to XRP micropayment developer. It was a big success, sparking a wider discussion and making the topic understandable to a broad audience.

During the upcoming co-design sessions (in April and May, see dates above), we will delve deeper into the operationalization of web monetization. We hope to present the result of our research efforts in the form of a Waag microdonor web extension prototype at a larger conference in June.

We have set up a blog series (shared both on waag.org and on this community platform) to take the public along in our research trajectory. The first post was a broader introduction to the project and web monetization in general, the second an explanation of the technical findings so far.

Moreover, the event last week was recorded and can be viewed through this link (though in Dutch).

As mentioned previously, we will organize three co-design sessions in April and May and eventually end with a presentation of the project at a final event in June. Additionally, we will continue the blogpost series as update towards the public. Finally, next steps in the technical research trajectory encompass further research and development of the Waag web extension prototype, including determining the exact specifications that a user will be able to choose from (see the latest blogpost for further information).

We're still looking for people to join our first co-design session on April 6th (1:30 - 3:00 PM CET), that focuses on the potential of web monetization from a broader socio-economic perspective. Interested? Contact Hannah through here or at hannah[@]waag.org and we'll send you more information.

Apart from that: there's so many great initiatives on here, it would be great to join forces and compare projects! Feel free to contact us to arrange something, we would be interested to see how our projects overlap and where we can learn from each other.

Once suspended, microdonor will not be able to comment or publish posts until their suspension is removed.

Once unsuspended, microdonor will be able to comment and publish posts again.

Once unpublished, all posts by microdonor will become hidden and only accessible to themselves.

If microdonor is not suspended, they can still re-publish their posts from their dashboard.

Once unpublished, this post will become invisible to the public and only accessible to Hannah.

Thanks for keeping The Interledger Community 🌱 safe. Here is what you can do to flag microdonor:

Unflagging microdonor will restore default visibility to their posts.