Hi everyone! It's Eylem and Frederic 👋.

This is the first Grant Report about our project "Freesound Licensing". First of all, a little bit about us: We are the Music Technology Group (MTG), a research group of Universitat Pompeu Fabra in Barcelona, Spain. Among many other projects, at the MTG we make Freesound (https://freesound.org), and we're starting now the Freesound Licensing project. Freesound Licensing's goal is to provide a service to users who upload Creative Commons sounds to Freesound that will allow them to re-license the sounds to 3rd parties that need to use the sounds under terms not allowed by the original Creative Commons licenses. The goal is to provide a solution to the typical problem of someone wanting to use a CC-BY-NC sound from Freesound in a commercial project. Freesound Licensing will mediate between that someone and the sound author to generate a new license in exchange for a payment. This will benefit both uploaders and downloaders, but also, by keeping a small share of the license payments, Freesound Licensing will contribute to the sustainability of Freesound. As grantees from Grant for the Web, we have been able to dedicate some resources to the development of the platform and integration of Web Monetization technologies.

During the first phase of GftW, we moved step by step.👣

1️⃣ Get Familiar with Web monetization and related technologies

Currently, the Freesound platform only supports Creative Commons licensing and since we propose to establish a new licensing system via Web monetization, we carefully went over the documentation of Web Monetization, Coil, and Interledger.

2️⃣ Design the requirements of the Freesound Licensing platform

We love any sound and so do the users of the Freesound platform! Hence, we cautiously thought about the requirements of the platform to deliver a smooth and hassle-free experience to the users. We categorized our user profiles as sound author, sound user, and platform owner. We puzzled our heads and started to think about the needs of these user types.

After studying our case, defining the fundamental requirements, and getting clued on Web monetization and the features it provides, we rolled up our sleeves and dived into the technical part!

Here are some examples from the current implementation, v0.1: 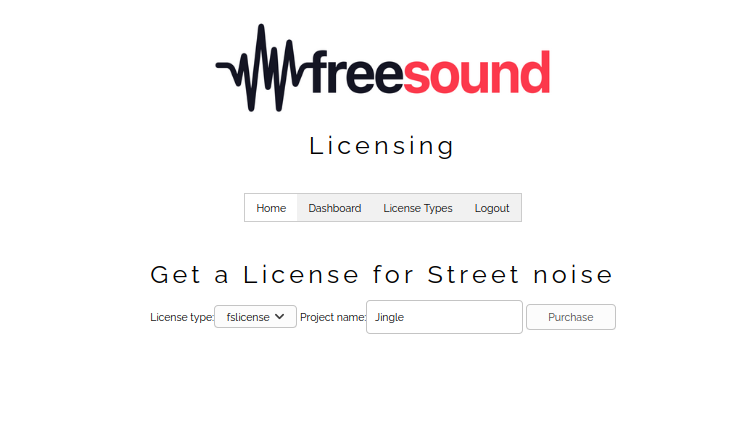 SRS
As a first step, after a brain-storming session, we came up with the possible user stories and how we can technically implement them. We mainly focused on the simplicity of the Freesound Licensing platform and how it can be integrated or be reusable for other scenarios.

Since the Freesound platform is built with Django, we decided to move further with Python's Django Web Framework in this project and for Database, our choice was PostgreSQL. Currently, the licensing platform is not connected to the main platform, Freesound, but after finalizing it, we aim to integrate it to operate with the current Freesound platform.

One of the problems we faced during the prototype implementation was the core functionality; payment via Web Monetization. In the Freesound Licensing platform, the transaction amount is larger than the amount that can be sent via Web Monetization (the minimum amount we have in mind is ~5$). Also, the notion of payment amounts depending on time spent is not a suitable idea for our use case because the sounds are consumed outside the Freesound Licensing platform. Therefore, we have been looking for a more optimal and suitable option such as working directly with Interledger protocol and STREAM.

📌 Our next and crucial step is to solve the license purchasing issue mentioned above via Web Monetization or implementation with Interledger protocol. For this, we will need input from the Web monetization community to see what is the best solution given our requirements. We'll investigate the work by @roelfjan and @sid because they might have already gone through some of the steps we need to follow now.

📌 One of the requirements we defined in SRS was to visualize the statistics of the purchased licenses to platform owner and sound author. We will implement a data visualization system for this purpose.

📌 Since it is the first prototype, we aim to transform the template of the Freesound Licensing platform to be suitable with the Freesound platform.

As it was mentioned in one of our What's next? part, we are looking for a proper solution to our one-time-payment case.

We opened a discussion on this: https://community.webmonetization.org/ffont/comment/1ao and we recently received some relevant input. Thanks!

What is the Open Web?

Join us for the Interledger Community Call - 11 January 2023

Once suspended, freesoundlicensing will not be able to comment or publish posts until their suspension is removed.

Once unsuspended, freesoundlicensing will be able to comment and publish posts again.

Once unpublished, all posts by freesoundlicensing will become hidden and only accessible to themselves.

If freesoundlicensing is not suspended, they can still re-publish their posts from their dashboard.

Once unpublished, this post will become invisible to the public and only accessible to Sultan Eylem Atabay.

Thanks for keeping The Interledger Community 🌱 safe. Here is what you can do to flag freesoundlicensing:

Unflagging freesoundlicensing will restore default visibility to their posts.