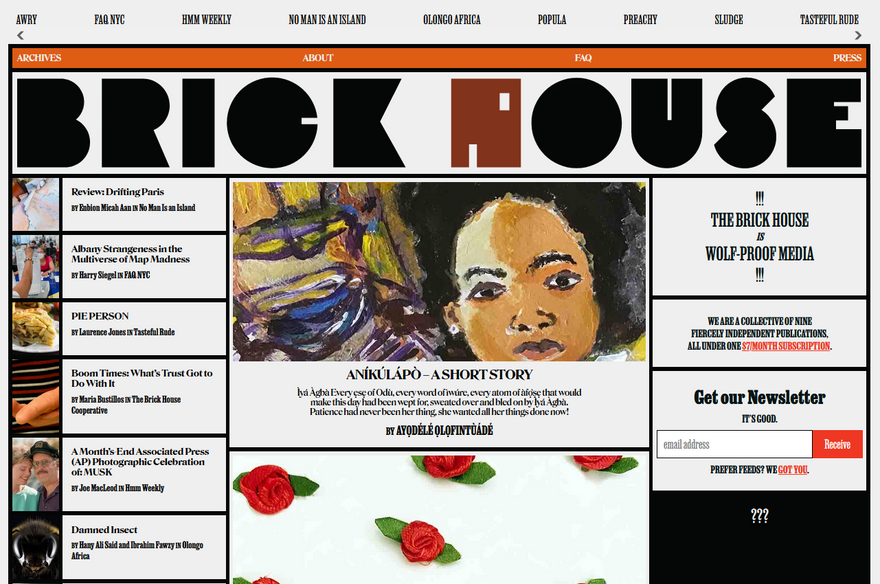 On Monday, May 16th, we began rolling out The Brick House’s beautiful, exciting, long-planned site design, thanks to the generosity of Grant for the Web. Sludge’s David Moore, Hmm Weekly’s Joe MacLeod and Brick House lead developer Jacob Ford worked together, to:

• Incorporate the current proposed Web Monetization API across the Brick House network to encourage microtipping flow from participating browsers and patrons, and

• Create a lively, engaging design that integrates our cooperative and promotes its goals, providing readers with much clearer, more tempting options for reading, participation and support for our work as independent journalists, editors and artists.

Jacob also began research into more standardized typologies for written content—consulting with Hugh McGuire and others working on the OPDS/BookServer open specification—so content can more easily be packaged, syndicated, and and remain beautifully and appropriately formatted, no matter its original medium or CMS used for initial publication.

THE BRICK HOUSE CONTINUES TO BE EXCELLENT TO READ

Our grant permitted Brick House publishers to fund new journalism, art and essays from all over the world. A small selection of recent favorites:

• At OlongoAfrica: grappling with the future of the post-colonial museum in Nigeria, and a eulogy for the “doyen of African linguistics,” Ayọ̀ Bámgbóṣé

• Preachy's meditations on the Trinity River in north Texas

• Awry published a sobering comic about Russia’s possible invasion of Ukraine, a few weeks before the fear became reality 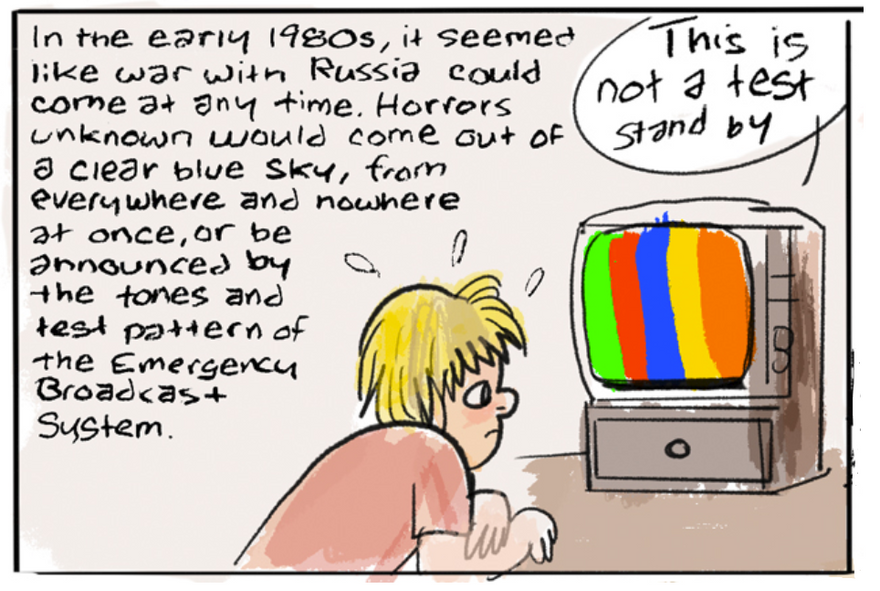 • The story of an Indian family’s social media rupture appeared at Popula, as well as “What Kind of Writer Accuses Libraries of Stealing?” a wrangle on the subject of digital ownership rights

• At Tasteful Rude, a Nigerian essayist's moving thoughts on the everyday slaughter of animals, and a “pie person”'s enlightened baking philosophy

• Taipei-based No Man Is an Island published scores of thoughtful and piercing reviews of films and music, as well as this extraordinary story of a rediscovered Taiwanese sculpture

We had a setback early in the year with a near-miss on a Kickstarter, based on a printed version of the Brick House anthology that we sold, in permanent digital form, to the Internet Archive’s Open Library last fall. We’ve planned some improvements (and simplification) of our fundraising pitch, and will be revisiting the crowdfunder in the coming weeks.

Our major goals for the grant period are two:
• Brick House website completion
• Complete plans and make connections to advance the BRIET plug-in/marketplace for library accession of permanent digital assets

Our first objective has launched, and we’ll be continuing to expand, refine and improve the site over the remainder of the grant period. Before we update you on BRIET's progress, though, we’d like to pause for a shoutout regarding

Particularly exciting for the Brick House this year: The opportunity to participate in the recent MozFest experiment in microtipping, a long-sought feature for us.

For the MozFest experiment, we decided to devote all of the Brick House’s microtips to the special project of one of our members, OlongoAfrica: the founding of a new book imprint, Olongo Books. We wrote a short piece to this effect and publicized it as widely as we could. The fundraiser brought $136 in microtips to this worthy cause. We thought this an extremely successful experiment, in view of the fact that so many readers aren’t yet familiar with Coil, wallets, etc.

We can’t wait to coordinate and promote microtipping and microfunding of individual stories and projects at the Brick House.

Digital ownership rights in the United States have come under fire on multiple fronts in recent months. Corporate publishing is attacking the right of libraries to own digital books, with some publishers outright refusing to sell certain ebooks to libraries at all; we're also seeing serious pushback against states’ efforts to control ebook price gouging. These moves are taking place in the shadow of ongoing litigation by corporate publishers against the Internet Archive, plus an alarming increase in book banning in schools and libraries in the U.S.

The Brick House aims to counter these developments through BRIET, a simple, user-friendly system whereby publishers large and small can offer permanent, library-ready digital assets to libraries, for sale or for free distribution. We’re participating in the development side of this effort with a large number of experts and leading lights of the publishing and library worlds, including the Internet Archive and the Open Library, the Library Futures consortium, Hugh McGuire of Pressbooks and Librivox, and Paul Ford of Postlight.

The Brick House will also do its part to demonstrate IRL how ethical publishers can ensure that their work will remain circulating in libraries. To that end, we met with Alice Waters, food activist, educator, legendary chef and founder of Chez Panisse, whose Edible Schoolyard project incorporates a wealth of fee-free, freely distributable lesson plans and teaching materials for schools and libraries. Publicizing the distribution of free educational materials from Edible Schoolyard is high on our list of first steps for when BRIET becomes a reality.

We’ve had productive meetings with all the key members of the development group, and look forward to a next meeting in New York in early June to begin nailing down specifics, budgets and timelines.

SHOUTING FROM THE ROOFTOPS

With this valuable funding, we’ve been able to get our newsletter program back on track, with increasingly appealing, well-designed original short essays that readers look forward to each week. We’ve more than doubled the number of our tweets and are hitting 200 likes per week on Twitter for the first time since we got started.

The new website launch incorporates an evolution in our thinking on paywalls and subscriptions. We’ve decided, rather than hampering the growth of our small project by lowering a paywall, to focus on a donation rather than a subscription model, and continue to make all our content freely available.

For our next crowdfunding promotion, we will be giving away copies of our book to high-level and longstanding supporters, while broadcasting the larger message of our support for libraries: EBOOKS ARE BOOKS. This way we will demonstrate our independent editorial values while giving readers more opportunities to support our work.

Our participation in the OptOut independent publishers’ group is also picking up steam. We’ve helped create a video highlighting the crucial role independent media plays in the information ecosystem, and will publicize this effort along with others in the group. This will be released in the next few weeks, and will open up new opportunities to spread the news of our new website and initiatives.

WHAT’S NEXT FOR THE BRICK HOUSE?

In the time remaining in our grant period, we’ll be publishing great stories, comics and podcasts, launching promotions, refining the website and, especially, making more progress on our work in protecting libraries and archives.

We mean to complete all the tasks on our timeline and more.

Grateful thanks from all of us at the Brick House to everyone at Interledger and Grant for the Web and all our colleagues and fellow grantees.

Finally got to play with Rafiki

Once suspended, mariabustillos will not be able to comment or publish posts until their suspension is removed.

Once unsuspended, mariabustillos will be able to comment and publish posts again.

Once unpublished, all posts by mariabustillos will become hidden and only accessible to themselves.

If mariabustillos is not suspended, they can still re-publish their posts from their dashboard.

Once unpublished, this post will become invisible to the public and only accessible to Maria Bustillos.

Thanks for keeping The Interledger Community 🌱 safe. Here is what you can do to flag mariabustillos:

Unflagging mariabustillos will restore default visibility to their posts.