Hi, GTFW/Web Monetization Community! I'm Andy Baio, the founder of Skittish, a playful virtual space for online events. Skittish brings people together into a game-like interactive 3D environment that’s designed from the ground up for socially-driven events, big and small.

If you're wondering what that looks like, here's a little tour.

A week ago, we finally came out of hiding and announced the project we'd secretly worked on since our grant was announced in October.

The reaction was a bit of a whirlwind, including media coverage from The Verge, Wired, and New World Notes.

The resulting flood of interest was overwhelming, and I've spent the last week talking to dozens of interesting event organizers, artists/creators, and organizations itching to use Skittish to bring together their own communities.

The last few months have been a bit of a whirlwind, and this is our first Grant Report, so there's a lot to cover. Before getting into the update, I want to explain a little bit about what Skittish is and hopes to accomplish.

For those who don't know me, I'm the co-creator of XOXO, an experimental festival celebrating independently-produced art and technology, held (almost) every year in Portland, Oregon. (I've also done a bunch of other things you might have heard of.)

After the pandemic cancelled our festival last year, I started attending a bunch of virtual events, mostly out of boredom and longing for connecting to other people.

Unfortunately, many of them were pretty uninspiring, basically just fancy webinars with breakout rooms for Zoom. Others were just livestreams with little room for social interaction beyond a global chat room.

Almost all of them left me feeling like I’d either sat through a long meeting or watched a long YouTube video. Was this even an event? Did I actually attend anything?

As depressing as most virtual events were, there were three bright spots of creative experimentation happening over the last year:

There are some amazing projects out there, but I started outlining a hybrid of these ideas: an online event venue for large-scale gatherings that used spatial audio, didn’t assume people were comfortable being on camera, with real-time customization of the space, and built in a 3D engine for a more immersive game-like feel.

More than anything, I wanted it to be optimized for fun: interesting to explore on its own, make new friends, and a vibrant place for creators and event organizers to bring together their communities in a new way.

Grant for the Web

As I was working on the first prototype, it was clear this was far more than a side project, and I’d need additional resources to fund development and design.

Desigan Chinniah encouraged me to apply for Grant for the Web, and I submitted a grant proposal to build a virtual event space, in which attendees can financially support creators, organizers, and events they love using the Web Monetization API (or traditional payment methods).

At the time I proposed it, Skittish didn't yet have a name:

Virtual Venue for Playfully Immersive Events in the Browser
Building a new virtual space to organize and attend large-scale immersive and playful real-time conferences, festivals, and performances in the browser, with a focus on casual social interaction with audio and video. By integrating the Web Monetization API, attendees can financially support the artists, organizers, and events they love simply by attending events or exploring the spaces they've designed."

Three months later, I was floored to discover I'd received a Flagship Grant! By early November, I received the funds and was able to bring on a contract developer to help out. 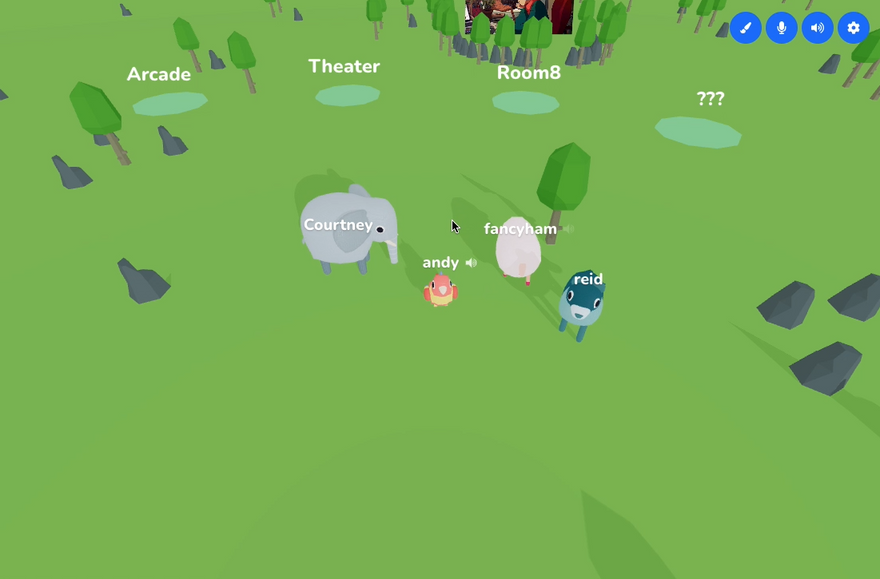 In December, I scrapped my initial Three.js prototype and worked with creative technologist Mike Bodge to build the new version in react-three-fiber, a powerful React renderer for Three.js, with a thriving community and helper libraries. Unfortunately, existing client work took Mike off the project a month later.

Through his work on react-three-game-engine, a budding game engine for react-three-fiber, I found Brisbane-based developer Simon Hales, who started working with me on Skittish in January. He hit the ground running, initiated a complete TypeScript rewrite, and we've worked together to add much of the functionality you can see in the current app.

It’s still early in development, but this is what Skittish supports so far:

If they don't add a payment pointer, we use Skittish's pointer as the default, allowing people to support Skittish directly while attending events. You can see what that looks like in the video below.

There were three goals outlined in the initial proposal:

Create a compelling and playful virtual space for attendees and artists to express themselves creatively, interacting with old and new friends online in ways that aren't currently possible in real-life or with existing platforms.

So far, we've made tremendous progress in the first goal. We've tested Skittish with hundreds of friends, acquaintances, and potential organization partners, and the feedback has been universally positive. It's clear we've accomplished the goal of making something compelling and unique, even at this early stage.

Provide a source of reliable, meaningful income for artists, performers, and organizers interested in adapting real-world experiences to a new virtual space.

It remains to be seen whether it will become a meaningful source of income for artists and performers, and we're still working on deciding how to charge those types of individual creators, but there's clear demand. We believe that Skittish is a more compelling experience for immersive events that's worth paying for, but we'll only know with time after launching publicly and people start using it.

Build a sustainable independent business with a tangible revenue model, retaining creative and financial control of the project while supporting a small thriving team.

There's a clear path to revenue for Skittish, and we've already secured two paying events starting in May. Charging event organizers is an obvious model, but there's enormous potential in addressing the needs of individual creators/artists and brands/sponsors, as well as running original events ourselves. It's very plausible that Skittish will be sustainable, with monthly revenue fully covering expenses, by September.

There was one key deliverable cited in my original proposal:

"Within a six month period, the goal is to launch and start running monetized events on the platform."

We received grant funding in early November, and despite a complete rewrite in January, we're on track to hit that goal, continuing to run private beta events over the next couple months and our first paid public events in May.

The milestones in our timeline have evolved slightly, as some things ended up significantly easier than expected and others more challenging or became less critical.

We only started talking about Skittish last Tuesday, but have been thrilled with the response so far. We don't have a marketing budget, but a combination of word-of-mouth and organic press coverage has led to nearly 2,000 people signing up for our announcement list in the last week.

As I mentioned before, we received profiles in The Verge, Wired, and New World Notes.

Most exciting to me are the artists and event organizers who have reached out directly by email and DMs, expressing interest in using Skittish. Some of those have unusual requirements, but most are well-suited to Skittish even in its current beta state.

Our immediate goal is to get Skittish ready for a public launch, which requires a combination of new features, fixing bugs, design customization, and load testing. We plan to spend the next three months resolving these issues, while doing a series of increasingly larger free beta tests.

We now have a sizable group of willing beta testers, but we don't have anyone deeply familiar with both events and the Web Monetization API, to help think through creative uses of it beyond what we're doing right now.

Creators. I’m intent on making Skittish into something that individual artists and creators can use to bring together their own community, whether it’s debuting a new video on YouTube, doing a book reading, a live concert, or playtesting a new game — and make money doing it. If that sounds like something you’d be interested in, get in touch.

Event Organizers. After having co-organized seven years of XOXO, I empathize with the plight facing event organizers right now who are struggling to convince attendees and sponsors to pay for lackluster events. I want to make events that are unique and valuable, worth the time and energy to show up for, and worth paying for, so you can continue to support yourself doing what you love. If you have an idea for an event you’d like to run in Skittish, I’d love to hear it.

Environmental Artist. I’m looking to immediately hire a freelance 3D environmental artist to help design a space for everyone to explore, somewhere between a festival grounds and Disneyland—warm, approachable, and playful. Candidates will be comfortable working in flat-shaded low-polygon constraints optimized for the web. Aesthetically, I’m inspired by the wholesome games movement, and games like Alba, WATTAM, Untitled Goose Game, Ooblets, Windosill, Donut County, and I Am Dead. If that sounds like you, email me a link to your portfolio. Introductions welcome!

I'm extremely grateful to Grant for the Web for believing in this idea and making it possible. I'd love to hear any feedback you have about the project, feel free to leave a comment or get in touch with me directly. Thanks!

Once suspended, virtualvenue will not be able to comment or publish posts until their suspension is removed.

Once unsuspended, virtualvenue will be able to comment and publish posts again.

Once unpublished, all posts by virtualvenue will become hidden and only accessible to themselves.

If virtualvenue is not suspended, they can still re-publish their posts from their dashboard.

Once unpublished, this post will become invisible to the public and only accessible to Andy Baio.

Thanks for keeping The Interledger Community 🌱 safe. Here is what you can do to flag virtualvenue:

Unflagging virtualvenue will restore default visibility to their posts.