Hello again, GTFW/Web Monetization Community! I'm Andy Baio, the founder of Skittish, a playful virtual space for online events. In case you're not familiar with it, Skittish is a colorful game-like 3D environment where you play as cute animal avatars and talk with your real voice using stereo spatial audio.

Hanging at The Pond at the GFTW Community Demo Party 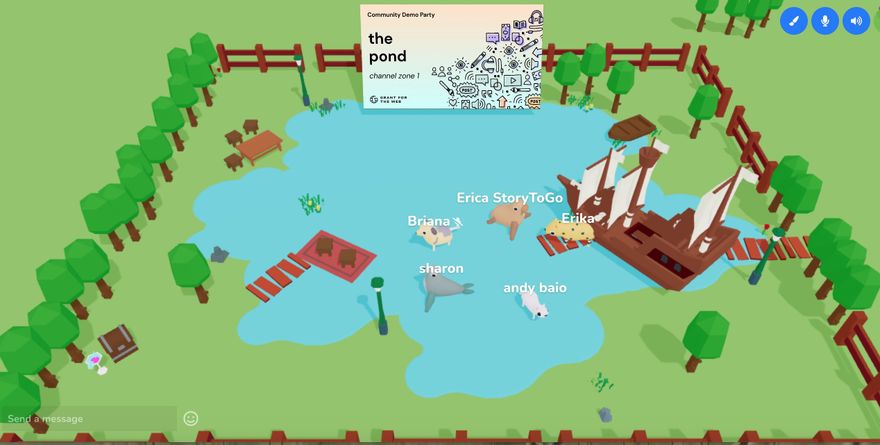 Since our first project update in late February, so much has happened that it's hard to summarize it all.

In short, we've built a product that I'm really proud of and have run tons of events, big and small, ranging from big conferences, a film festival, a game design camp, internal corporate events, unconferences, and casual meetups. Thousands of people have been invited to Skittish's private beta, and it's been used for several Web Monetization/GFTW events, which has been great to see.

Grant for the Web Pizza Party 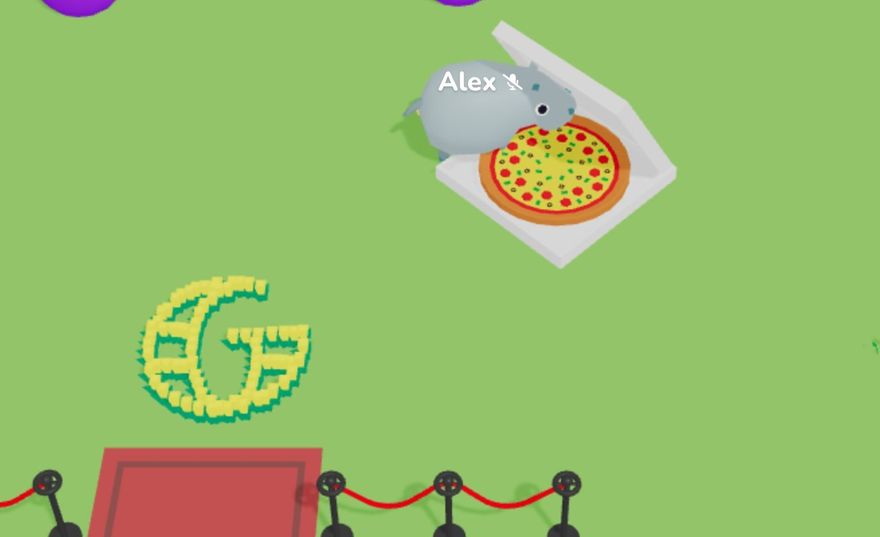 We've added dozens of new features and improvements since the last update, some of which I'll detail below. It's improved radically over the last few months, based largely on the feedback of beta testers.

It hasn't been easy: it's taken several months longer to launch publicly than I originally predicted as we've tried to improve the experience for everyone, fix inevitable bugs/UX issues, and add critical features.

But fortunately, we've kept our operating costs lower than expected, letting us stretch our grant funds considerably further to cover the additional time. Our grant period was initially set to end in mid-April, which we extended to mid-July and then finally mid-September.

There were three goals outlined in the initial proposal:

Create a compelling and playful virtual space for attendees and artists to express themselves creatively, interacting with old and new friends online in ways that aren't currently possible in real-life or with existing platforms.

Of our three main objectives, I feel the most confident about this one. We've seen many events run in Skittish, and each one has used the tools and features we've developed to uniquely customize the space and make it feel special for their event.

There are many people experimenting with spatial audio and unusual virtual spaces right now, but Skittish feels special and unique in how it works when groups come together there.

Provide a source of reliable, meaningful income for artists, performers, and organizers interested in adapting real-world experiences to a new virtual space.

Since it's still early in its life, this is a difficult goal to evaluate. We've had many events in Skittish, but only a handful have charged for access — most were free, sponsored by the companies and organizations that were running the events.

I hope that Skittish finds an audience of creators and event organizers using it to make a living, but it may end up being something that's used primarily by companies/organizations that can afford to use it for bigger events without charging for access. Time will tell.

Build a sustainable independent business with a tangible revenue model, retaining creative and financial control of the project while supporting a small thriving team.

This is still a work-in-progress. We've done some paid events and added Stripe integration for self-service upgrades, but with Skittish still in private beta, it will take more time to become a sustainable business. I feel confident about the revenue model, but it'll take some time to reach profitability.

The list of features and improvements to Skittish since the initial update is pretty massive, I can't possibly include them all here — but here are some of the highlights.

High Fidelity. One of the biggest changes was an architecture decision: deciding to move away from native WebRTC for audio and use High Fidelity, a new commercial service for scalable spatial audio from the creator of Second Life. We were encountering a number issues with WebRTC audio — cross-browser compatibility, audio quality, echo cancellation, network problems with VPNs, and most critically, scalability. We were encountering issues with 15+ audio streams, let alone the hundreds we hoped to reach. High Fidelity eliminated all those problems, with extremely high-quality audio. As a pay-per-minute service, it limited the free tier we could offer, but this felt like a worthy tradeoff.

Stages. We added stages, allowing event organizers to broadcast their voice to everyone in the space, regardless of distance. We also added the ability to assign a speaker role to any attendee, or open the stage up to the public.

Channel Zones. Skittish supports up to 150 people talking in a single room, but we added resizable private audio spaces called Channel Zones, allowing you to split a room into multiple audio zones, each with their own 150 person limit.

Stripe Billing. In addition to Web Monetization, we added Stripe integration to let people upgrade to a paid plan with expanded capacity and audio quotas. In the background, this required a lot of work on analytics and tracking to accurately measure usage.

Event Privacy. Previously, all Skittish events were public, but we added a password option, as well as an invite-only modes, in which people can only join the event if their email is added to Skittish directly or on a shared Google Sheets spreadsheet.

Text Chat and Emotes. People wanted a way to talk to one another even if they were too far away to be heard audibly, so we added global text chat, and simple emotes display an emoji above your character, good for non-verbal gestures while watching programming together or listening to talks.

Roles and Permissions. We added special Admin and Speaker roles, allowing you to grant special access to the asset editor, moderation tools, video screens, and stages to users in real-time.

Signs. We added interactive signs which can fit a couple words, but can be customized with paragraphs of text and links, suitable for event information, schedules, codes of conduct, or anything else.

Moderation Tools. We added tools for event organizers to mute or ban problem attendees, remove their messages from chat, or ban them from chat entirely.

Focus Video. We frequently heard that people wanted to see the embedded video screens better, so we made a way to change the camera angle to zoom into the videos without leaving the environment entirely.

Watching a talk at the Akita Grantee Hangout

Opening/Closing Events. Previously, all Skittish events were open all the time. When an event’s closed, admins and speakers can still join the event, allowing organizers to customize the space and rehearse with speakers. Anyone else joining will go in a waiting room until doors open. When the event's over, closing the event will swiftly kick everyone.

Editor Improvements. Our world editor was refined to allow admins to natively upload 3D assets, changing their colors, position, and collider information, and to allow any event organizer to rotate and move objects after they're placed.

Improved Video Screens. We added volume controls and support for livestreams from YouTube, Facebook, and Twitch, with all video synchronized to all attendees.

Custom Assets. We commissioned our first original 3D models from the talented artist, Joi Fulton, to give additional options for editors. Those grant-funded assets are included in the repo for anyone to use.

There's more, but I'll stop there. Needless to say, the changes have been pretty massive and development moved quickly.

While in private invite-only beta, we've limited our communications to occasional blog posts and [social media], but sometimes the press found us. After our initial announcement was covered by outlets like The Verge and Wired, we were later interviewed by TechCrunch, TechRepublic, and Discourse.

I spoke about Skittish at several events, most presenting from within Skittish itself: GAIA, TBD, New Relic's FutureStack (which also used Skittish as their social space), and Grant for the Web's Community Call, which can be viewed below, a snapshot of what Skittish looked like in late June.

I expect to do a more concerted marketing push and outreach once we open publicly later this month.

This is our final grant report, but Skittish is just getting started. Our next near-term goals are focusing on opening publicly with a more frictionless demo and public website, improving accessibility, adding deeper options for customizing the world to feel visually distinct, and adding new interactive objects and gameplay to change what people can do in the space.

We've also recently secured sponsorship to cover the cost of running free community events for non-profits or other independent creators who wouldn't otherwise be able to afford it.

I'm also excited to start running our own events in Skittish, partly because I enjoy bringing people together, but also to push the boundaries in how Skittish can be used and demonstrate its capabilities.

As we wrap up this stage of our development, I'm feeling very hopeful, ready to move forward to try to reach a wider audience and sustainable revenue on our own, building Skittish into a long-term independent business.

We've also open-sourced our frontend, backend, and 3D assets under the Apache License 2.0, everything that we worked on during the grant period. We hope people can learn from it and find it useful.

If you'd like to reach me, feel free to PM me or email me directly at andy@skittish.com.

Getting this off the ground could not have been possible without Grant for the Web's support, and we're eternally grateful. 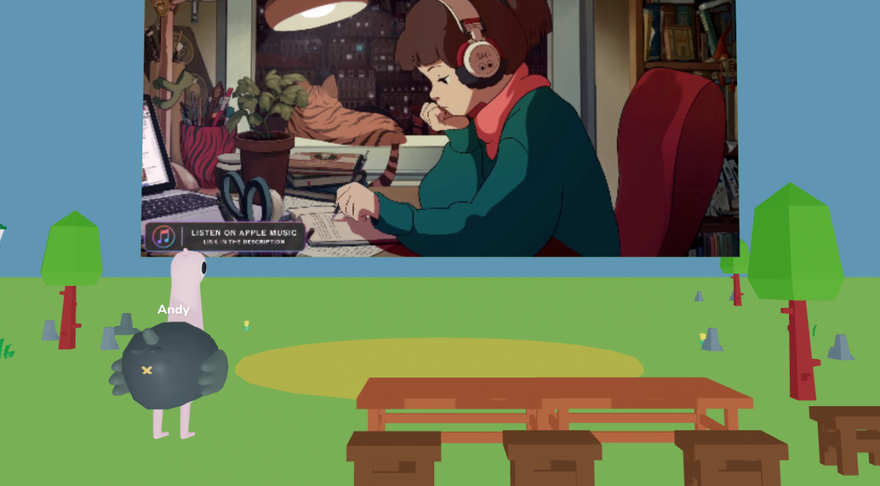 Experimenting with Web Monetizing Medium: Exploring the Possibilities of Generating Revenue from Medium as an author

The Weekly Roundup is back on schedule!

Once suspended, virtualvenue will not be able to comment or publish posts until their suspension is removed.

Once unsuspended, virtualvenue will be able to comment and publish posts again.

Once unpublished, all posts by virtualvenue will become hidden and only accessible to themselves.

If virtualvenue is not suspended, they can still re-publish their posts from their dashboard.

Once unpublished, this post will become invisible to the public and only accessible to Andy Baio.

Thanks for keeping The Interledger Community 🌱 safe. Here is what you can do to flag virtualvenue:

Unflagging virtualvenue will restore default visibility to their posts.